Swedish newspaper JP; Mats A rewarded for his fabulous pictures 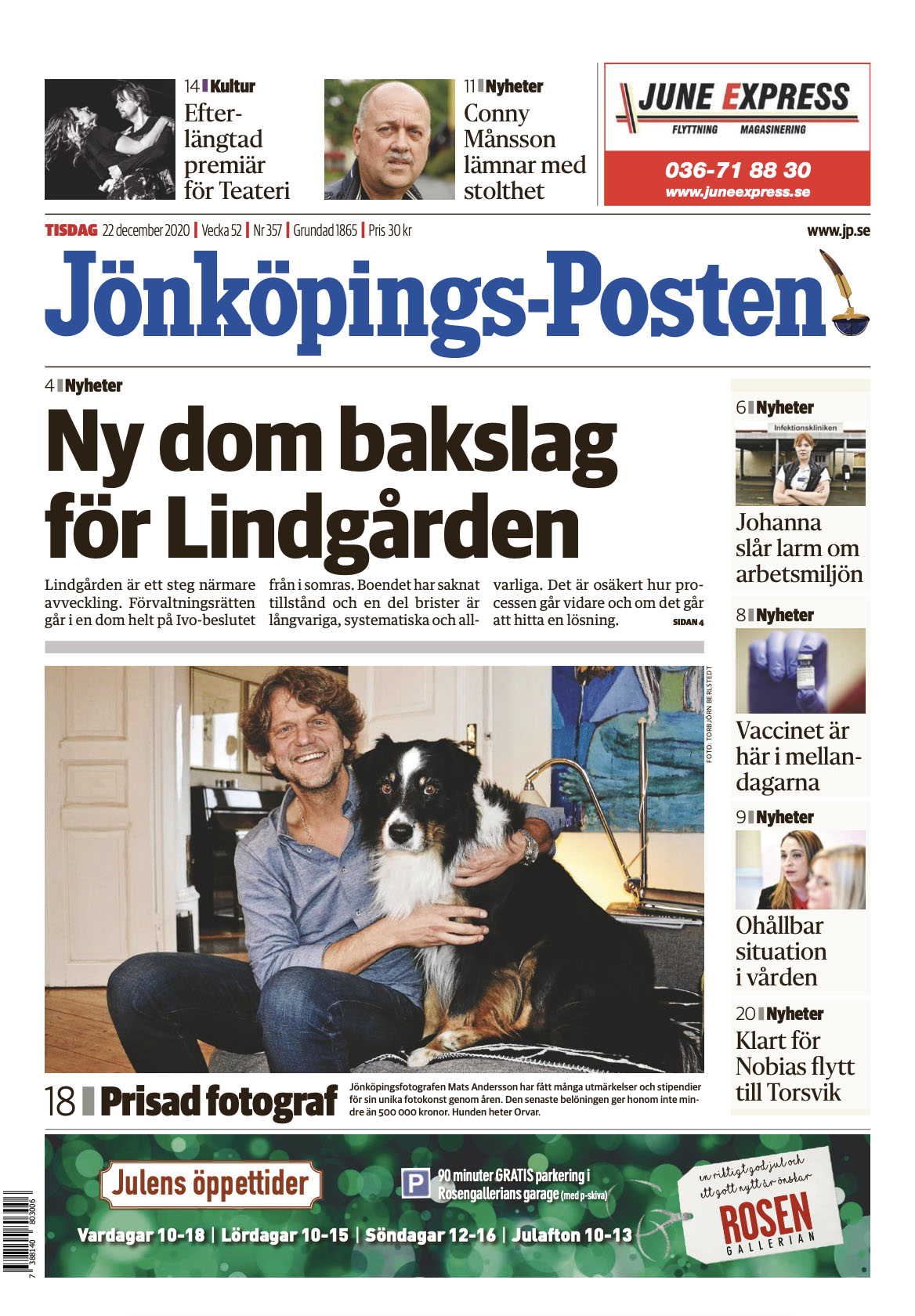 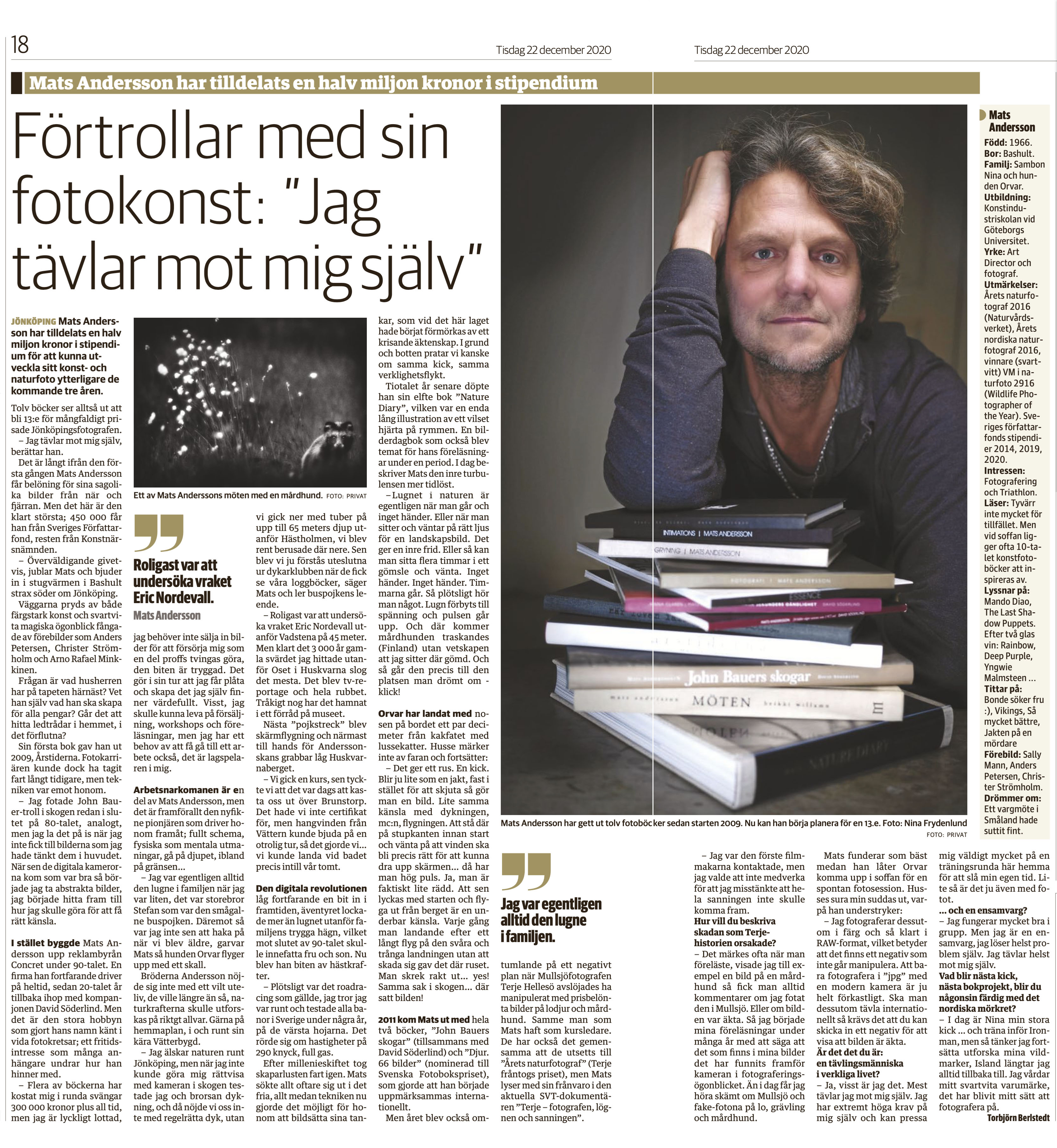 ... This is not the first time Mats Andersson has been rewarded for his fabulous pictures from near and far. But this is by far his biggest reward as he receives SEK 450,000 from the Swedish Writers 'Fund, and SEK 50,000 from the Artists' Committee. - Overwhelming of course!, says Mats as he invites me into his home in Bashult just south of Jönköping, Sweden.
The walls are adorned with both colorful art and black and white magical moments captured by role models such as Anders Petersen, Christer Strömholm and Arno Rafael Minkkinen. My question is; what does he have going on in the future? Is it possible to find clues in his home, in the past?
In 2009, he published his first book, Årstiderna. However, his photography career could have taken off much earlier, but the technology was against him.
- I took analogue pictures of John Bauer trolls in the woods already in the late 80's, but I put them in the drawer when I did not manage to make the pictures I had in mind. When the digital cameras came, I started taking abstract pictures, I started to figure out how to do to get the right feeling. During the 90s, Mats Andersson built up the advertising agency Concret. A company he still runs full time, for about 20 years together with his partner David Söderlind. But it is his great hobby of art and nature photography that has made his name known world wide; a hobby that many followers wonder how he manages.
- Several of the books have cost me SEK 300,000 plus all the hours I put into it, but I am lucky, I do not have to sell images to support myself as some professionals are forced to do. This in turn means that I get to record and create what I find valuable. Sure, I could live on image sales, workshops and lectures, but I have a need to go to work too, that's the team player in me.
The workaholic is part of Mats Andersson, but it is the curious pioneer who drives him forward; full schedule, physical and mental challenges, go deep, sometimes to the limit…
- I was the calm in the family when I was little, it was my big brother Stefan who was the bully boy. However, I joined him quickly as I got older. The Andersson brothers were not content with a wild nightlife, they wanted more than that, the forces of nature were to be explored in earnest. Preferably at home, in and around their beloved homeland.
- I love the nature around Jönköping, but when I could not do myself justice with the camera in the forest, my brother and I tried scuba diving. We were not content with regular dives, we went down to 65 meters deep in our lake Vättern, we got really drunk down there. Then of course we were excluded from the diving club when they got to see our logbooks, says Mats and smiles.
- The most fun was to examine the wreck Eric Nordevall outside Vadstena at a depth of 45 meters. But of course the 3,000-year-old sword I found outside Oset in Huskvarna beat most things. It was a TV report and the whole mess. Sadly, it has ended up in a storage room at the museum. The next big thing was paragliding and the closest thing to Andersson's boys was Huskvarna-mountain.
- We took a paragliding course, then we thought it was time to throw ourselves off the cliff of Huskvarna mountain. We did not have a certificate for that, but the headwind from Lake Vättern could offer an incredible trip, so we did… we could land right next to my house. The digital revolution was still a bit into the future, the adventure attracted more than the peace outside the family's safe enclosure, which towards the end of the 90s would include wife and son. Now he was bitten by horsepower.
- Suddenly it was road racing that mattered, I think I was around and tested all tracks in Sweden for a few years, on the fastest Italian superbikes. The need for speed was awesome, of some 290 km/h, full throttle. After the turn of the millennium, the desire to create art rocketed again. Mats increasingly sought out the outdoors, all the while technology now enabled him to visualize his thoughts, which by this time had begun to darken by a bad marriage. Basically, we may be talking about the same kick, the same escape from reality. Ten years later, he named his eleventh book "Nature Diary", which was a single long illustration of a lost heart in space. A picture diary that also became the theme of his lectures for a period. Today, Mats describes the internal turbulence more timelessly ... /Torbjörn Berlstedt
Tweet